How To Find The Perfect Cast For Your muvee

From filling non-existent positions, to hiring only the smartest, to having a matchless, jealousy-inducing pantry in the office, we spoke to Terence Swee, Founder and CEO of muvee Technologies, to discover his modus operandi for building the ideal team.

One fine Thursday afternoon, being the new kid on the block in the heart of Singapore’s start-up ecosystem, a colleague and I took an afternoon stroll around the block, introducing ourselves and TalentDash to our neighbours. We hoped to speak with the founders of the many start-ups that are nestled in Ayer Rajah Crescent’s historic Block 71, a 40-year-old building that used to contain factories. Eager to learn more about the different companies’ hiring practices, we found ourselves talking to Terence Swee, Founder and Chief Executive Officer of muvee. With a mug of tea in his hands, he greeted us enthusiastically, welcoming us to the block. The story of muvee, which he then recounted, was too inspiring to withhold its insights from our readers.

Terence, an electrical engineer by training, graduated from the National University of Singapore with a Master’s in Digital Signal Processing. He founded muvee in 2001 with his then boss, Pete Kellock, when he was still just a researcher doing music analysis. Both of them were—and still are—passionate about music; Terence plays jazz piano, and Pete has a Ph.D. in Electronic Music and a Master’s in Music. They used this to their advantage in developing muvee’s editing software that cuts videos to the beat of music automatically—the first in the world. It started as a software for personal computers but has since expanded to mobile devices, focusing on action camera and drone users: the fastest growing market. As Pete, the first CEO, is no longer in the business, Terence is now at the helm. 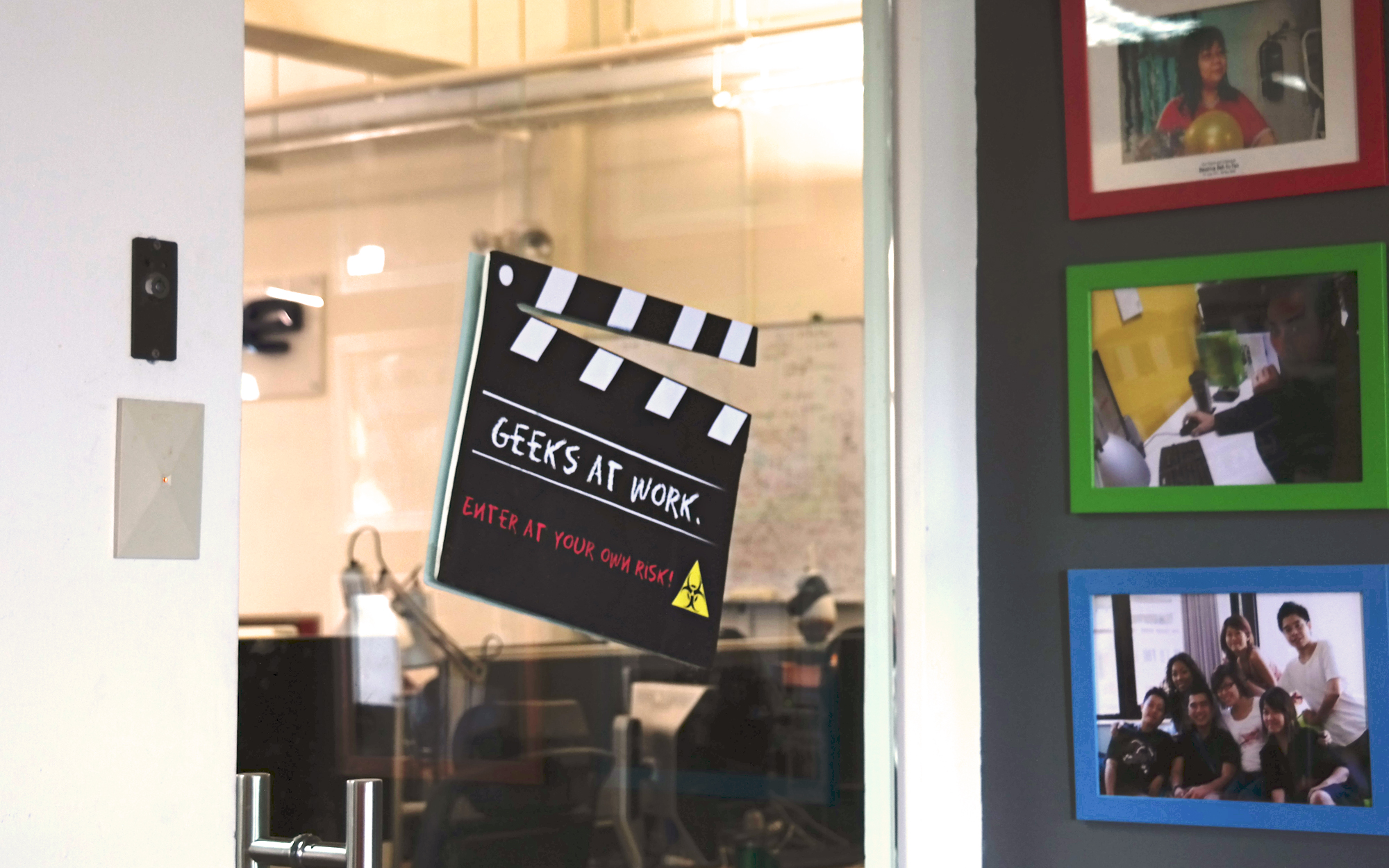 The glass door that separates the main working space from the pantry.

In the beginning, when the company needed to grow quickly to close big deals, they resorted to using incentives to get people to bring talent into the company. “We gave a pretty generous award to any muvee star who brings in another star who gets confirmed. There is a $500 bounty; if you help us hire someone, and after they pass their 3-month probation, you get your $500. We were pretty creative; those were the days before Facebook and LinkedIn. We actually advertised in The Straits Times before—I know, I’m so ashamed of that,” Terence chuckled. “Then later you have sites like JobsDB and JobStreet.”

Despite already being more than a decade old, as well as having expanded globally—from Silicon Valley in San Francisco, to Tokyo, and to Seoul—the amiable CEO still makes time to conduct interviews personally. “We hire globally because we try to find people who are left and right-brained,” he explained, adding “because we are about creating stuff. They can be a musician, an artist, a photographer, or even a wakeboarder with tattoos.”

Just as David Ogilvy once said, “Hire people who are better than you are, then leave them to get on with it”, Terence believes that smart people will hire smart people. “I always hire people smarter than myself, and that helps. We also believe that smart people become indispensable very quickly. We have, in some cases, offered positions where there is no job to be done. We just say, ‘This guy is so smart, so rare, that we want him to join us.’ We don’t know what he is going to do, but because he is so smart, he’ll find something to do that is valuable to us. We have also actually hired people we’ve met in bars before.”

Terence went on to reminisce about the hiring process of one of his prime software engineers. “One of our top developers here is a classic example. I met him in a jazz bar when he was a musician. He was one of the top jazz pianists in Singapore. He picked up jazz bass just by watching Youtube, and now he performs as a bassist. He has a degree in Mechanical Engineering and was working in NUS for some professor—a dead end job and he was bored. So I said to him, ‘Why don’t you come work for us? Improve our music analysis and algorithm.’ Now he is one of our top developers. He came without knowing how to code—not being an actual software developer per se—and now he codes for both iPhone and android apps on his own. I hired him because he plays better (jazz) than me.”

This extraordinarily creative take on hiring resulted in a diversely talented team—half of the team members in Singapore come from 13 different countries. The muvee crew is currently made up of 50-60 staff globally, with most of them working in their headquarters right here in Block 71. “We are much more ‘targeted’ now because we have passed the stage where we need to make ten new hires overnight; we are not at that point in our lives,” Terence explained. “We are pretty established, so people know us. We do have people cold calling us telling us that they want to work for us.” 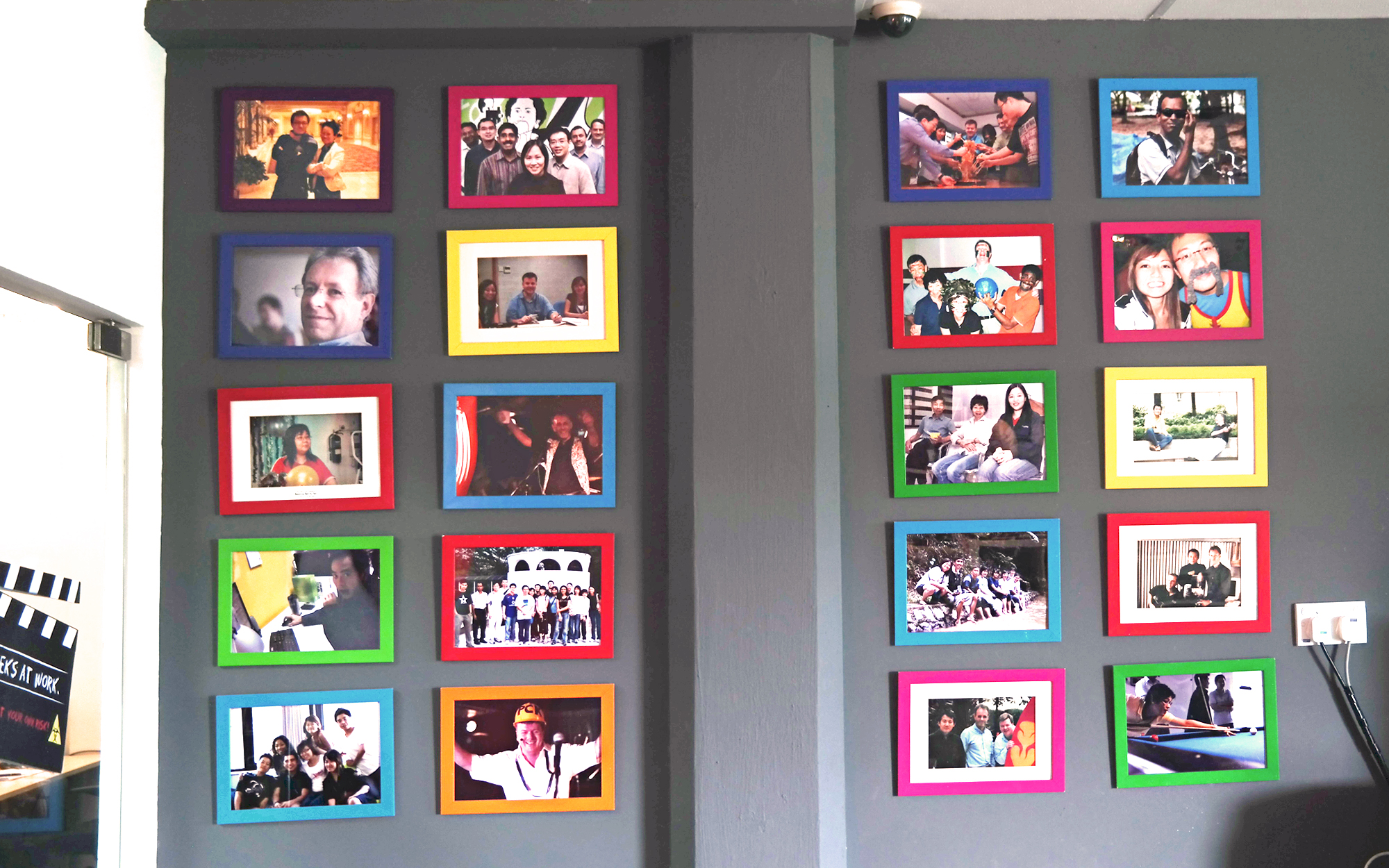 Their pantry’s wall is decorated with delightfully crooked, colourfully framed company photos which radiate a sense of homeliness.

Despite their seemingly infinite choices for talented people, Terence admitted that he is still very selective with the people he recruits and he tries to handpick them himself. “There are people I meet during my travels around the world whom I am impressed with, and I say ‘Hey! Do you want to move to Singapore? We need someone like you to do this’, or ‘someone like you could possibly do that for us’, even though we do not exactly have a job to fill at that moment.”

Finding smart people is one thing but some thought has to go into making them want to work for you—and keeping it that way. So, of course, muvee played well into the efficacy of employer branding. “We’ve had articles written about how cool our office it. This was way before Google had fancy offices; before it became fashionable,” Terence proudly shared. 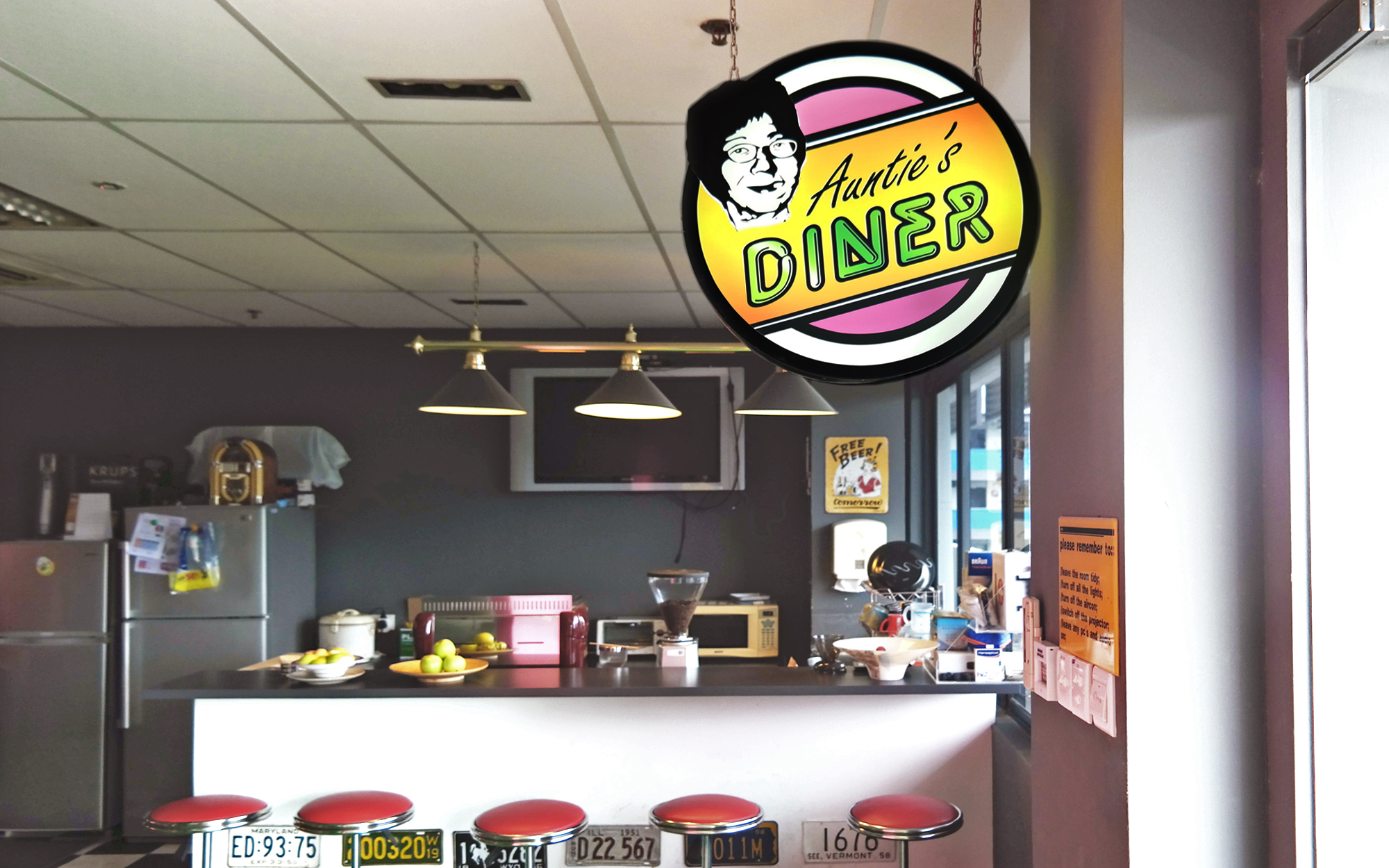 And cool, their office is indeed; we saw it first hand on a personal tour. Their pantry is styled like an American diner, complete with red seats, a foosball table, a bar area decorated with American car plates, and a matching, red la Scala coffee machine. Named “Auntie’s Diner”, Terence shared that it is named after their tea lady, whom they affectionately address as “Auntie”. She has been with muvee since its humble beginnings. Our tour dove deeper into the heart of the office. In the main working space, there is a TV area with a couch and bean bags for staff to take naps. After all, a good break is essential to maintaining the flow of creativity. With all these simple perks that create a homely environment, who wouldn’t feel a sense of belonging working here? 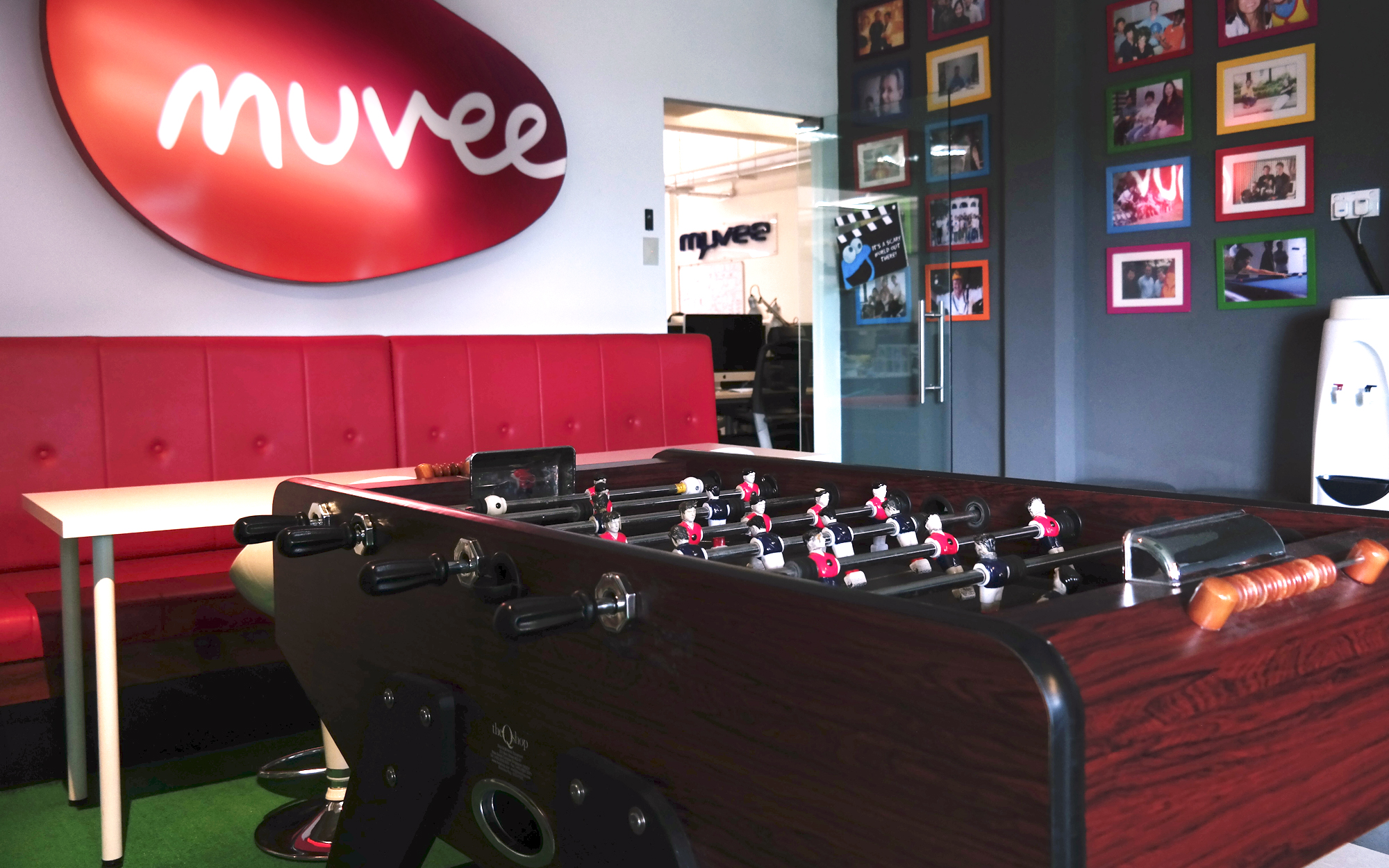 The foosball table sits in the centre of the pantry, allowing staff to have a game and wind down just a few steps away from their work area.

Terence admitted that throughout the company’s life, they have never had customers in Singapore—or, at least, very few. Interestingly, the company’s PR presence here on the home turf is focused on employer branding: telling stories about the company, the office, and the founders, but never about the product. “The PR focus in Singapore is all about hiring. We couldn’t sell PC software (back then) because of Sim Lim Square and Johor Bahru,” Terence explained, demonstrating another reason for the cool office space. “muvee has never targeted Singaporeans as potential end-users. It was marketed as a U.S. company, and so Singaporeans only become end-users thinking that muvee is a U.S. company.”

Muvee’s story is exemplary of the way start-ups can expand while keeping closely in line with their values and vision—a move, essential to building not just a well-defined brand for the company and the product, but also as an employer. Terence’s special sense of handpicking talent as he travels also ensures that he never misses a catch. In essence, he does not impose limits to the talent pool, and in doing so, he has managed to build a robust team by snagging great talent.

We would like to thank Terence who made time to share muvee’s story with us, and also for showing us the office. If you have any interesting story to share, please contact via email at admin@talentdash.com.

Stay in the loop.

Join us and get the latest posts delivered straight to your inbox.

Employer Branding: 3 Steps to Clean Up Your Talent Pool

All Aboard the Social Media Recruitment Express